A bag of money, all thanks to a book about poker 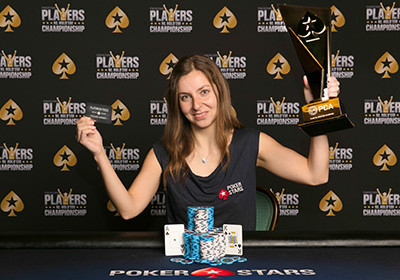 Imagine you're living a completely normal life. Every morning you go to work, and every day you spend time with family or your hobbies. And suddenly, seemingly out of nowhere, you discover that you have certain hidden abilities and your life gets turned upside down. What’s that, you think that’s impossible?

When American writer Maria Konnikova was thinking about the theme of her new book, she still had no idea that her life would soon take a truly unexpected turn. Maria became famous thanks to numerous bestsellers, in which she focused on psychology and personal development. Her next book was supposed to be about luck and skill – in particular, how much skill one needs in order to be lucky and/or happy.

Well, and where does one need a lot of luck and skill? Naturally in poker! The American-born writer wanted to understand the mind of poker players, and she started reading the “Theory of Games and Economic Behaviour“ by John von Neumann, who viewed poker as a “metaphor for life”. And in order to make her research more efficient, she decided to try playing the game as well.

Erik Seidel, a professional poker player, taught her the rules of the game and card combinations. He took her under his auspices and over time showed her all the beauty hidden in the game. The poker master in fact said that at the beginning Maria was not doing too well, because she never played the game before. As every new player, she made many mistakes which prevented her from winning. But the author started working harder and harder, and after some time she got the reward she deserved.

Her luck took an abrupt turn and Maria started winning. These successes motivated her so much that she started playing even more intensely. “I began living and breathing for poker,” she said in one of her interviews. And her newly-found passion for the game got her to the PokerStars Championship in Monte Carlo, where she scored a second-place finish.

Until now she managed to win over 100,000 Euros, and she actively plays even now. In fact, she believes that it's precisely her writing and psychological background that helps her find success in gambling. She claims that this allows her to better read people and predict what they’re planning.

In 2018, Maria took part in numerous tournaments, and managed to bring home huge sums of money. But she did not give up on her career as an author, quite the opposite She claims it was all part of her research for her upcoming book – “The Biggest Bluff”, which should be available in bookstores sometime in 2019. And that the money she won is just a nice bonus.