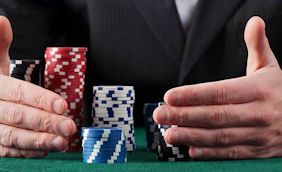 The first big mistake in poker usually occurs when you start considering yourself a good poker player. Everything before that was only part of the learning experience, and so all mistakes before that should rather be considered a part of the learning process and not true mistakes. But once we convince ourselves that we know how to play poker, mistakes will follow almost immediately. It is like when new drivers, having driven their first few thousands of kilometers, start considering themselves good drivers, and then cause their first accident soon after. But let us get back to poker.

We arrive at a poker table confident in our abilities, and are convinced that our combination of A, K will certainly be a winning one after a flop of K, 9, 10. After all, we have a pair of kings supported by an ace. That's when we make one of the classical poker mistakes. We completely forget about the our opponents and what they could be holding. And so we start raising immediately after the flop and continue even after the turn and river. Even though we do not enter the game with just any combination of cards (as we used to do when we began), the euphoria from these great cards has made us forget poker math. We forget that our opponents could be holding straights or colors, or about the possibility of sets or full house. And this is at a time when we believe that we already know all about poker and it is time to start winning. Well, this means it is time to get back to learning by recapitulating the most common mistakes in poker.

Most Common Mistakes when Playing Poker

There is really a huge number of different mistakes in poker, and it is only up to us what we are willing to do to avoid them.